The sharing of dirty needles among injection drug users is a method of direct transmission of bloodborne disease such as HIV, hepatitis B and hepatitis C. Syringe exchanges can provide sterile needles, along with offering or referring drug users to disease prevention education, care and treatment.
With an opioid epidemic sweeping the country, needle exchanges could help prevent disease outbreaks.
“There is still a large unmet need for sterile equipment,” said CDC Director Dr. Tom Frieden. “The risk appears to be even higher in some rural areas where access to more sterile equipment is even more limited.”

Rates of HIV drop for minorities

According to the CDC, AIDS diagnoses among drug users peaked in 1993 and have fallen nearly 90% since then. However, injection drug use is still responsible for 9% of all HIV diagnoses in the United States and contributed to a 150% increase in acute cases of hepatitis C nationwide. One-third of all drug users have shared needles in the past year. 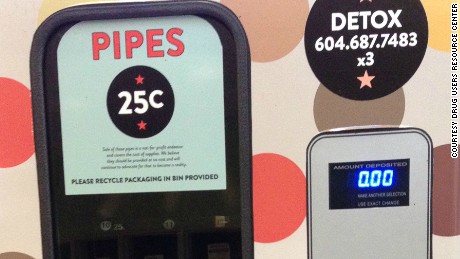 Between 2008 and 2014, the rate of HIV diagnoses among African-American drug users dropped by nearly 60%. The rate among Latino drug users dropped by almost 50%. Needle sharing fell by 34% and 12% in the respective drug-using groups in the same time period.
But the effect of syringe exchanges does not appear to be as great among white drug users. More than 40% of all white drug users report that they share needles, about the same as a decade ago. Although HIV rates among white drug users fell by 27% between 2008 and 2014, they have remained relatively stable since then.
“It is encouraging to see prevention efforts paying off in African-American and Latino communities. We must now take concrete steps that build upon and accelerate that progress. HIV risk remains too high for all people who inject drugs,” said Dr. Eugene McCray, director of the CDC’s Division of HIV/AIDS Prevention.
While the CDC has historically recommended that states ensure that drug users have access to effective prevention services including sterile injection equipment, the choice to have needle exchanges has traditionally been left to states and local governments. As a result, areas that are not as open to the idea of needle exchanges may not have them.

Rates of bloodborne diseases have risen significantly in areas that have been hardest hit by the opioid epidemic, like Kentucky, Tennessee, Virginia and West Virginia. In those areas, there was a 360% increase in acute hepatitis C cases between 2006 and 2012.
In Indiana last year, Gov. Mike Pence, now the vice president-elect, issued a public health emergency after a rampant outbreak of HIV linked to the injection of the opioid Opana. Scott County, the epicenter of the outbreak, averaged five HIV cases a year. The outbreak resulted in at least 140 cases of HIV.
On Tueday, the Harm Reduction Coalition praised the CDC’s report and the fact that it comes at a pivotal moment when there is a need for more syringe exchange programs.
“In the past two years, we’ve seen the most dramatic expansion in new harm reduction programs since the height of the AIDS epidemic in the early ’90s,” said Daniel Raymond, the coalition’s policy director. “But we’re racing against time: New hepatitis C infections and the risk of further HIV outbreaks demonstrate why syringe exchange remains a vital but underutilized public health tool.
“For communities on the front lines of the opioid and heroin crisis, the pressing questions about syringe exchange are no longer whether to implement them but how quickly they can scale up.”
Join the conversation

Dr. Jonathan Mermin, director of the CDC’s National Center for HIV/AIDS, Viral Hepatitis, STD and TB Prevention, reinforced that studies show how effective the programs can be. Even with federal funding made available to states and local communities in December 2015, there are still barriers, he said, and “an uneven patchwork of access.”

This site uses Akismet to reduce spam. Learn how your comment data is processed.